“Fear or Courage: You Choose!”

There are many things in our life that cause fear.  Many people fear failure.  Some fear success.  Some fear what others are going to think of them.  Some fear the pain they must go through to reach a difficult goal.

Fear is a common emotion that we all must battle.

Anyone who has ever accomplished anything great has had to deal with it.  Success is not an absence of fear — as John Maxwell says, “We all have fear.” 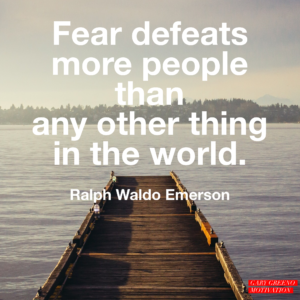 However, the successful people in life understand the key to overcoming fear is not eliminating it, but rather choosing courage instead.  It’s being afraid, but going on anyway.

There will often be an element of fear as we go through life, but you must understand that you get to choose the emotion that is going to dominate your thinking.  (Read “Change your thinking”)

Choosing courage over fear means you are going to take action!

It’s ok to have fear, but it’s not ok to allow that fear to keep you from stepping out and taking a risk you know in your heart you should take.

Fear will lie to you.  The little voice in your head that says, “Just keep things simple”, or “Things are fine just the way they are”, or “You don’t really want to take that risk”.

What have you been putting off because of fear?  What goal, what dream, what great thing do you want to pursue?  Don’t listen to the lies of fear, and stop making excuses.

It’s time to choose courage, and know that your dream can be bigger than your fear.  It’s all a matter of choice.  Nurture your courage.  The more you focus on the positive, the more the negative will shrink away.

You were born for a purpose.  You have a calling to be great.  Take action, take a risk, and don’t allow anything to keep you from living out your purpose.

Forget Everything And Run

Face Everything And Rise